These days we are seeing fledgling birds everywhere as they leave their nests and learn the ways of the world with their parents nearby. At our home feeders, young cardinals are being fed by parents. The young lack the crest and most have pretty scruffy plumage.

Young titmice are showing up with rad “hairdos” with their crest feathers slowly coming in every which way. Young orioles in various plumages are joining their parents at our jelly feeders. The adult males are dressed in their best plumage as if to be ready for Father’s Day!

The woodpecker babies are particularly comical as they flock to the suet and peanuts. The young downy and hairy woodpeckers are sporting the red cap on their foreheads. I watched one young downy trying to grab onto a nearby shaggy-barked hickory tree without much success and finally opted for a smoother trunk elsewhere. The immature red-bellied woodpeckers look very strange with their bald heads, no red at all like their parents.

Purple martins were actively visiting their gourds at Lot 1, though we couldn’t see if they were feeding young yet. On the beach there, Margo spotted two well-camouflaged fledgling piping plovers running around the wrack line just out of sight of the gulls at the edge of the water. We didn’t see the parents, but they had to be near. Least tern were diving offshore and were carrying off fish to feed their young.

As we drove through the S curves south of the Salt Pannes, we heard a chattering noise and I stopped thinking it sounded remotely like a sedge wren. But there was more than one with this call so not likely a sedge wren. We tried the Merlin app but it could not come up with any suggestions.

We finally spotted one bird in the dense foliage. It was tail-less, yellow underneath with wingbars, and obviously a fledgling Baltimore oriole. It was certainly younger that any orioles visiting our home feeders. We couldn’t locate the second bird but they were obviously begging to be fed with a call that was not familiar to us and unlike any adult oriole that we have heard.

Along the road outside of Hellcat circle, up to ten willets were circling in the air. It wasn’t clear what the disturbance was. Right on the circle was an adult willet with 4 fluffy young huddled together. They were right on the circle, so automobile speed was not as much a factor and there were fewer cars on the island that late in the day. The willets were quite a way from the marsh but, hopefully, the parent bird was able to guide the fledglings in that direction before nightfall. Perhaps the willets we saw circling nearby was their security team!

The evening show at the Hellcat dike, viewing birds in Bill Forward Pool and the North Pool, was superb that evening. When we arrived, there was enough of a breeze to keep the no-see’ums at bay. With help from two young birders, we first found the tri-colored heron against the reeds in the Bill Forward Pool. Next, Margo spotted a fluffy black Virgina Rail chick across the water in the North Pool. As we watched that chick, we could hear a parent bird calling from the phragmites closer to our shore. 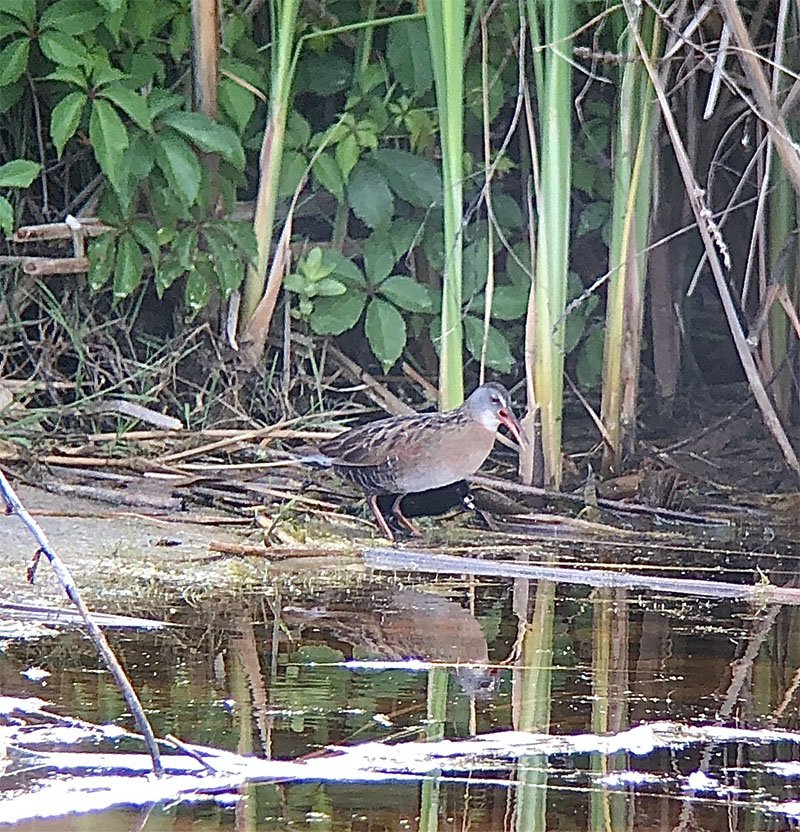 Seeing this black fluffy chick brought flashbacks from my first years of birding. I have told you about my initial introduction to birds with my sixth grade teacher, Mr. Beach, at Mount Auburn Cemetery. Another memorable moment those first years was being with Mr. Beach early morning at Great Meadows Wildlife refuge in Concord. We were on the wooden tower that was there then and Mr. Beach pointed found several families of rails, including the young “puff-balls” of Virginia and Sora rails on the mud with their parents in the marsh. There were common Gallinules and Coots with young as well in the early morning sun. It was a memorable experience that comes back to me all there years later. 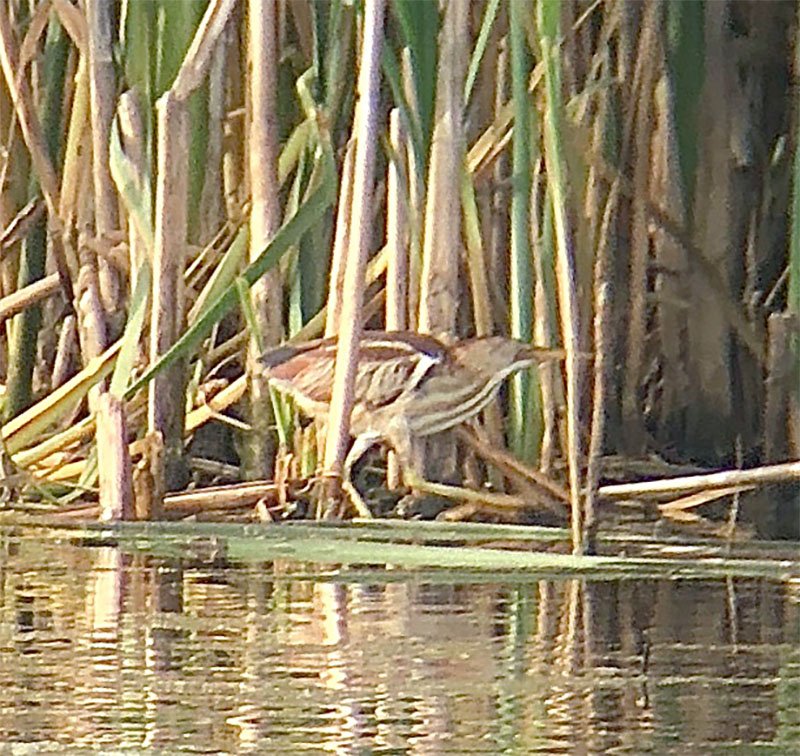 Back at Hellcat, we next spotted Least Bitterns. We first spotted a female then, a male. We saw at least a third bird, but we also heard several calls from the reeds on both sides of the water. It was hard to determine just how many bitterns there were

I then alerted Margo to an adult yellow-crowned night heron flying into the North Pool. It dropped behind some phragmites and we lost sight of it. I later relocated it on the marsh side of the dike and Margo was able to get some fantastic phone photos through the scope. Margo then spotted a second Virginia rail with another chick. This chick was younger than the first one that we saw. Adult rails were calling from both sides of the water so it was hard to figure how many rails were present, but we saw only two fledglings.

We then watch a tricolored heron fly in for Bill Forward Pool. We assumed that it was the same bird that we saw earlier but examination of Margo’s photos showed significant differences in this bird. Seeing all these herons, bitterns and rails made for a spectacular evening!