For faithful readers of this column, you will remember that last week we left our heroes (a.k.a. Margo, her brother Bob, and me) under the shelter of an overhang in front of a retail shop amid a series of thunderstorms in the little town of Watch Hill, Rhode Island. We had driven two and a half hours there, only to trudge another half hour down the sands of Napatree Point to try to find a rare Terek Sandpiper.

There we had searched for several hours for this rare bird with zero success, only to be threatened with nearby thunder and lightning. On our way back, the skies opened and drenched us thoroughly, leaving us with the need to wring some of Rhode Island rain out of our socks!

Our dilemma was that we had just learned that the rare sandpiper had returned to the lagoon where we had just spent hours searching. We contacted our birding friend Linda, who had left the “search party” considerable earlier than we did. Turned out that she was already past Providence on her way home and she immediately decided she would have to try at “o’dark thirty” the next morning. That wasn’t an option for us!

I was constantly checking the radar, hoping that there would be a break in the weather. It was the red radar cells of thunder and lightning that concerned us most. We couldn’t get any wetter, but we still had to carry our scopes and tripods (a.k.a. lightning rods) back down the open beach. Worse was that, the tide was also coming in and we would likely be walking through seawater – also a great conductor of electricity!

We looked at each other and Margo finally said: “You know if we don’t try now, we are not coming back to get another shot at this bird!” We knew she was right. So we decided that we were half an hour or more away from a new North American bird for us and we had to try. A few birders coming off the Point with thumbs up helped encouraged us further. So we waited for a break in the radar where no red, or even yellow appeared, and we headed back out.

This time the walk seemed longer, as most of the beach had been covered with the incoming tide. We inched our way along the edge of the sand by the dune grass. The rain had let up but thunder and lightning were still near. We finally caught sight of the lagoon and we saw several birders across the inlet looking in our direction, or so we thought. There were a few willets ahead of us on the shore, but we could see no other birds.

As we approached the inlet we could see more willets, a few plovers and a couple of sandpipers on the other side, where they had been before. The other birders were staring, and even photographing, in one particular direction. We concentrated on the birds there and finally spotted the Terek Sandpiper through our scopes!

With great patience, we finally caught sight of its unique upturned bill when it turned to give us a profile. Margo was even able to capture a few identifiable images with her phone through the scope. The bird “teetered” its tail up and down much like the spotted sandpipers that were also there. We could make out dark markings on it wings, but its up-turned bill was magnificent. 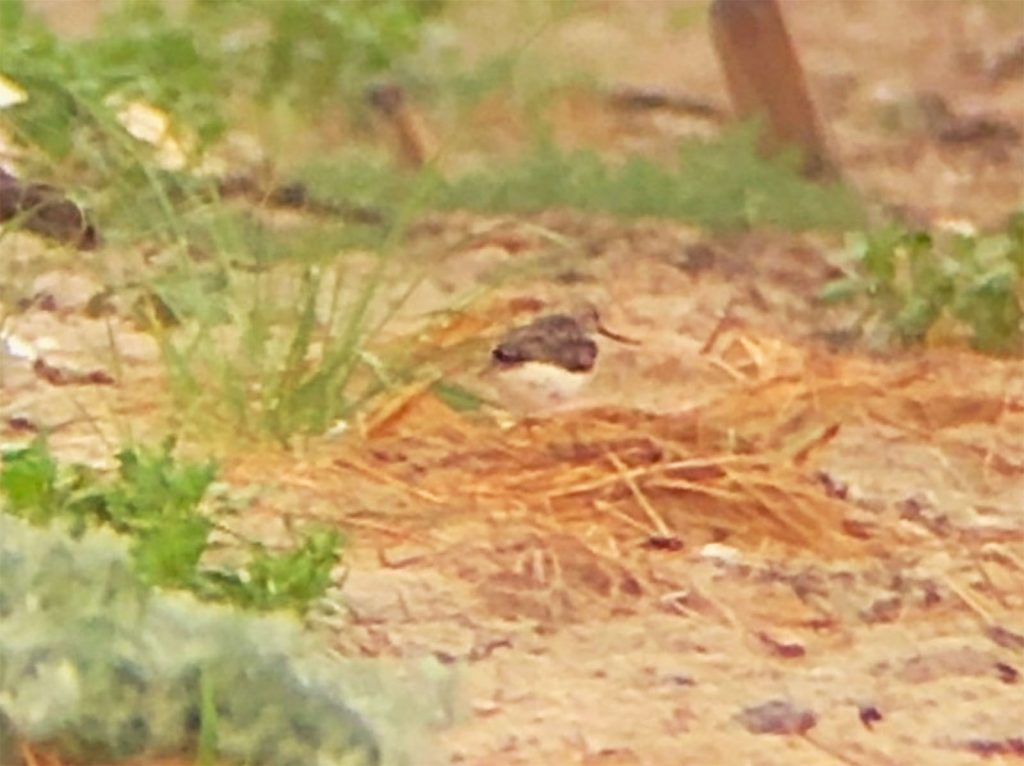 Satisfied with our looks at this awesome bird, we started back as the rain picked up a bit. We passed some other brave birders on our way off and we were able to give THEM the thumbs up! We had made the right decision, and though the ride home in wet clothes was a bit uncomfortable, we didn’t seem to care so much.